REGION | Abruzzo
PRACTICES | Certified Organic
TERROIR | The vineyards are located in the hills of Loreto Aprutino. A beautiful hamlet of uncontained nature neslted between the Gran Sasso (national park of Abruzzo) and the pristine Adriatic Sea and seaside town of Pescara. The vineyard elevation is 250 and 350 meters above sea level. They are made up of mostly clay soils with a large presence of limestone and sand.

In the hills between Pesara on the Adriatic Coast and the Gran Sasso massif, the tallest glacial mountain peaks of Central Italy, are the vineyards of Abbondanza, nestled in the hamlet of Loreto Aprutino. The area is quite wild, of unspoiled and uncontained nature brimming with vines, forests, fields of ancient grains, and groves of olive trees. Here Montepulciano thrives, benefitting from the vineyards’ prime location between the cooling slopes of massif Gran Sasso and the gentle coastal breeze of the Adriatic.

Abruzzo’s storied history is one of tension and turmoil. First conquered by the Romans, then divided between the Byzantine Empire, the Franks and the Lombards, the region became part of the Kingdom of Two Sicilies before finally being united with all of Italy.
Loreto Aprutino is THE terroir for Montepulciano, boasting the home of the iconic wines of Valentini. The limestone presence in the soil, the gentle slopes at high elevation, and the influence of the Adriatic 20km away create wines of beautiful density, spice and fleshy black fruit.

VINEYARDS |In the hills of Loreto Aprutino,  250 – 350 meters elevation.  Clay, with high sand and limestone content 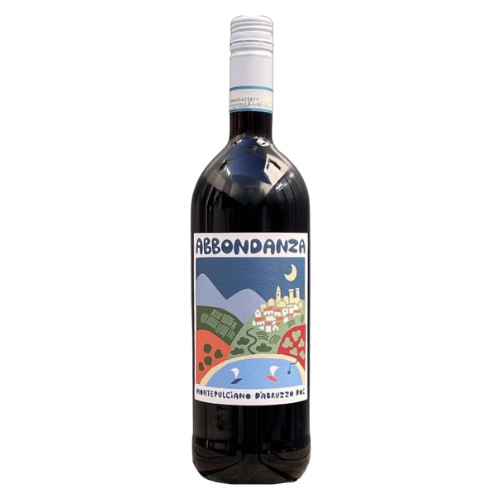